Our archers have been out and about to catch the last few weeks of outdoor season, and having great success! Detailed writeup below, but to summarise: five shoots, two Master Bowmen, two trophies, several medals, all in three weeks!

Over the 7th/8th September weekend, Lydia Sinnett-Smith was down in Basingstoke for the final leg of the National Tour. As the last chance to earn Tier 1 points, the field was particularly strong, and a touch of end-of-season weariness resulted in a 15th place ranking and 17th place in the H2H. 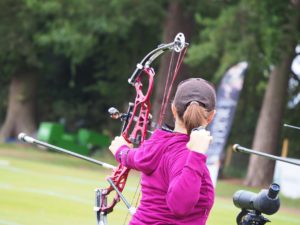 The same weekend, Jack Atkinson was at Meriden Double WA1440. Finding the weather just as chilly as it was in Basingstoke, Jack nonetheless shot two good MB scores to claim his 1300 star and finished 7th overall.

Jolly Archers and Bowmen of Glen

No rest for the wicked as the following weekend saw a split of CCB archers across two shoots again. Jack was joined by Anke Hannemann at the Jolly Archers Autumn York/Hereford shoot. It was unseasonably warm for September (mixed reviews on whether this was a nice surprise, or too hot). Despite the heat there were strong performances from Anke and Jack, both pipping friendly rivals to first place and claiming trophies for their efforts.
Ladies’ recurve was particularly close with Anke being second by one point at the halfway stage but putting in a strong back end to secure victory by one point!

It was a particularly good day for Jack as, in addition to a trophy and claiming his 1200 Rose, he also claimed his final Master Bowman score of the season (the third in just nine days!).
This is a big achievement and the paperwork now needs to be sent off to ArcheryGB for ratification and a nice shiny badge.

Also enjoying the warm weather were Lydia and Patrick Sinnett-Smith at the Bowmen of Glen WA1440. Coping with the strange up-and-downs of the field, both shot well. Patrick took home the gold medal in the Gents Masters category (best not to question the number of entrants) while Lydia got silver in Ladies Compound – and more importantly a Master Bowman score, only 1 point off GMB. This was good prep for the following weekend which saw Lydia, Anke and Jack in action representing the county versus Essex. 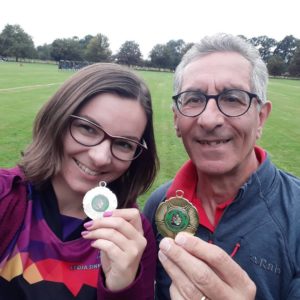 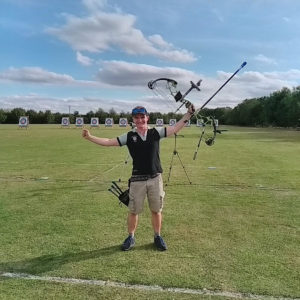 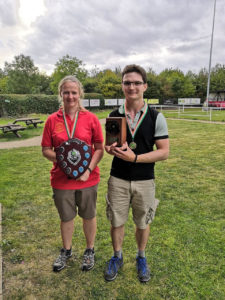 The final shoot of the season, this match was a bit varied in weather, ranging from wet on arrival, to hot during the second distance, wet and breezy after lunch, and thankfully dry for 30m and results! This does highlight why outdoor season is drawing to a close… Despite the varying conditions our archers shot well, helping both the compound and recurve teams to better scores than Essex. Sadly the unsighted and junior teams didn’t manage to match up to our rivals and the overall victory went to Essex – however, CCB didn’t contribute to those, so as a club we were victorious! Lydia also shot her third MB score to claim the classification – managing a PB and a GMB score, which bodes well for the following year!

It has been a busy and successful year for CCB – well done to all our archers who shot, whether it be one shoot or one every week (or so it feels…). If this has tempted you to give competitions a go next year but you don’t know where to start, please ask, as it is really fun and a good experience for everyone to try out.

This website uses cookies to improve your experience while you navigate through the website. Cookies that are categorised as necessary are stored on your browser as they are essential for the working and basic functionalities of the website. We also use third-party cookies that help us analyze and understand how you use this website. These cookies will be stored in your browser only with your consent. You have the option to opt-out of these cookies.
Necessary Always Enabled
Necessary cookies are absolutely essential for the website to function properly. These cookies ensure basic functionalities and security features of the website, anonymously.
Functional
Functional cookies help to perform certain functionalities like sharing the content of the website on social media platforms, collect feedbacks, and other third-party features.
Performance
Performance cookies are used to understand and analyze the key performance indexes of the website which helps in delivering a better user experience for the visitors.
Analytics
Analytical cookies are used to understand how visitors interact with the website. These cookies help provide information on metrics the number of visitors, bounce rate, traffic source, etc.
Advertisement
Advertisement cookies are used to provide visitors with relevant ads and marketing campaigns. These cookies track visitors across websites and collect information to provide customized ads.
Others
Other uncategorized cookies are those that are being analyzed and have not been classified into a category as yet.
SAVE & ACCEPT